Attention: a newer revised and better version of this post is available on LloydOfGamebooks.com

As I mentioned in my previous post, some people believe that there is something wrong with the genre of gamebooks and they think that it is impossible to write a good one due to the lack of game mechanics to be used. I admit that there is some truth to the limitations, but the article narrative is not a game mechanic is entirely wrong and in this post I will explain exactly why that is.

Before we start talking about Gamebook Mechanics, we should first recognize the very basic elements of any game. In theory, a video game (or any other game) consists of two major events: input and feedback. In simple words, the player takes any action such as move the mouse, click a button, move the pawn in a board game, etc and we call that input. For every input, there should be positive or negative feedback such as moving the character on the screen, hearing a sound or something else that provides the player a clue if he or she is doing well or not.

Here is the basic structure of any game: input - test of the input (performance test) - feedback

I already said that one of the most disturbing articles I've seen so far is the one named narrative is not a game mechanic by Raph Koster and based on his theory many people consider that games and story don't mix coming to the wrong conclusion that it is impossible to write a book which is also a good game.

Just take another look at the basic elements of any game! Narrative is a form of feedback, isn't it? I think that, not only narrative IS a game mechanic, it actually is the best form of feedback. Raph Koster argues that "games can and do exist without narrative". He is absolutely right, they do, but... Remember the old arcade games where the game at each level is the same as the level before and the only difference is the increased difficulty due to the faster speed of the game? Sure, that does make it more challenging, but how much closer to the final goal does it make you feel? You don't have any idea how far from winning the game you are, because you have no definitive final destination set. Kill as many enemies as possible and move on to the next level! That could be fun for a short period of time, but how much feeling of achievement do you have when you die at level 10 and you have no idea what the total number of levels is? Isn't it so much better to have the narrative feedback of "you just left the village and now you are in the forest. You are now one step closer to the mountains and therefore one step closer to finding and killing the evil wizard, who lives up there... Now you have overcome the wizard and you are victorious! The land is free of evil and everybody will live happily ever after"? Sure, a good narrative limits the replayability of the game, because you know exactly what is going to happen next time, but how many times do you want to replay the same scenario in the countless levels of a jump and run or a shooting game that doesn't have any narrative? The answer lies in the fact that we, as humans, like diversity and the feeling of accomplishment. It is hardwired in our brains by nature through the process of evolution (you can read more about that in my earlier post: psychology of games). Just ask your mother or wife to cook your favorite meal every single day forever! Eat it morning, lunch and dinner. How long do you think you can eat the same meal, even if it is your favorite one? We like diversity and we like having a final goal to reach, and the answer to that in the art of making games lies in providing the player with a diverse storyline and a clearly defined ultimate goal.

So, we have now covered the feedback mechanic in games and explained why the narrative of a gamebook is the best possible solution for providing feedback. Let's now talk about input in video games and the input mechanics of gamebooks! 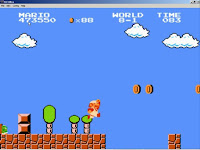 For the purpose of this post, we will take an example of a jump and run video game and compare it to a similar situation in a gamebook. Imagine that the obstacle you have to overcome is a deep chasm. Negative feedback in both, videogame and gamebook, would be: the character falls into the chasm and dies. Positive feedback would be: the character makes it safely to the other side and the adventure continues. You can provide this feedback through video or through narrative, it doesn't make a difference for the outcome.

Leaping a chasm in a Video Game

In order for the game to decide which one of the two possible outcomes to provide on the screen, it has to test the input of the player. An artificial intelligence test of the input in a video game would look something like this:

1. if the jump button is hit too soon, Super Mario is going to jump, but will fall into the chasm before he reaches the other side;

2. if the jump button was hit too late (after he walked off the edge), Super Mario is going to fall down into the chasm, because he didn't jump;

3. if a wrong button was hit (such as the run button instead of the jump button), Super Mario is not going to jump at all and he will fall in the chasm.

4. ideally, Super Mario is going to jump and make it to the other side if the jump button was hit somewhere between too soon and too late.

Leaping a chasm in a Gamebook Adventure

Unfortunately, we don't have the luxury of testing coordination (which button was hit) and speed (when was the button hit) in a Gamebook Adventure, so we replace testing those skills with the only other available option. No, we are not going to ask the player if he would like to jump! Obviously, the character needs to jump, otherwise falling down to its death is inevitable. Instead of asking a stupid question, we are going to test the stats of the player. Example1: roll 2 dice and add the value of your strength. If the number is equal or greater than 10 then you succeed and you continue on your adventure. If the number is lower than 10, you fall down in the chasm and die.

This is where a lot of people get upset. Rolling the dice is not a fair gameplay mechanic, because the outcome seems to be a matter of luck rather than a consequence based on the skills and knowledge of the player. That would be true only if the author has done a bad job writing the game part of the book and he or she didn't give the gamer a chance to build up the strength value of the character earlier in the adventure. See, the input in this example shouldn't be the randomness of the dice roll. The input is the value of the strength skill that should have been increased earlier in the book by making a meaningful choice. Maybe there was an option to purchase a headband of strength earlier in the game or there was a section where you had to choose between eating a good meal or picking up a fight in the tavern where the outcome turns out to be increased strength stat from eating the meal or loss of strength points due to injuries suffered in the fight.

There are two forms of feedback in Gamebooks: instant and delayed. In the example above, leaping over the chasm is a form of delayed feedback. A form of instant feedback is the instructions to increase your strength by 2 points after making the choice to eat the meal instead of picking a fight at the tavern.

As I already pointed out in my previous post, I am not claiming that Gamebooks represent the best of all game genres nor I am claiming that they are any better than video games. All I am saying is that due to the lack of other game mechanics, Gamebook Adventures provide the most diverse storyline and force the player to make the most meaningful choices, because they provoke critical thinking through forcing the gamer to assess the situation he or she was put in and then select the most rational action for the best possible outcome of the storyline and for the eventual success of the game character. I just wish that more of this kind of game mechanics, providing a lot of learning and personal improvement value to the player, would be implemented in video games. Just imagine how much more interesting and exciting an adventure like Diablo 2 would be, if it was putting the gamer in a situations that require certain meaningful and important choices altering the outcome of the story one way or another.

In the next post I will talk about the most important Gamebook Mechanic: Meaningful Choices.