A deeper look into the benefits of playing games by genre

No, I am definitely not going to talk about how the violence shown in computer games is bad. I grew up shooting and slicing creatures, animals and people in most of the games I played, but I didn't grow up a felon. Playing such games was just a way to vent out and entertain myself. Teachers or games can teach kids many things, but the core values must be thought at home, so let's stop blaming the School System, the Hollywood Movies or the Computer Games Industry for the everyday failure of parenting and for the lack of grown up attention that our modern world children are suffering from!

There is much difference between game genres and their real life value for the player. Let's first take a look at the one that I believe has the lowest potential of teaching important skills: Arcade Games

I have to admit that I am not a big fan of arcade games. Initially, they were built to take as many coins as possible from the person playing and they achieve that by constantly putting the main character in countless unexpected death situations. To be able to reach the end of an arcade game, the player must learn, through infinite trial and error sequences, when and where all the enemies will be showing up from as well as the timing and location of  all obstacles. There isn't much value in those games besides the provided visual and hearing experience that helps the players by taking their mind away from everyday problems for the duration of the game (in many cases that is until the player gets more frustrated with the game than he is with life). However, the arcade games still have value as they teach the following important lesson: learning from your previous mistakes in the process of trial and error, you can achieve more, advance further and eventually reach your final goal. That is a very valuable lesson for the kids to learn through playing those jump and run arcade games or seek and hide shooters. However, I see a big problem with the unlimited save and load options, because real life is not like that as we can't go back and fix things every single time we make a mistake. I am not saying that save and load should be removed completely, all I am trying to say is that they should be limited to specific locations in the game and loss of life or failure shouldn't be happening as often.

My personal opinion is that there is much more real world value in the Role Playing Games genre. Here we will use the example of the best one of them all during my prime as a gamer: Diablo 2 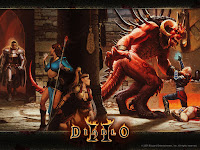 I very much enjoyed clicking the mouse button countless times all over the screen to defeat the next evil creature that crossed paths with me in Diablo 2. However, using the mouse over your enemies, in that otherwise excellent RPG, is a neat trick which gives the player just an illusion of control. It doesn't matter how quickly you click the mouse button nor how hard you click it. The hit points are calculated not on the player's actions, but on the skills and equipment gathered previously in the game. In addition to building confidence (like in the arcade games), the RPGs teach other very important character traits such as curiosity and patience, through making you seek, combine and carefully use items while carefully preparing for the next big encounter. The battles you pick and the enemies you choose to fight, teach another very important life lesson: taking calculated risks. However, this genre still lacks presenting the player with any meaningful choices that would affect the outcome of the adventure and would change the narrative one way or another. In other words, this game is almost as linear as the arcade jump and run games we discussed above.

I have to admit that my second favorite genre is Strategy (if you haven't guessed yet, my most favorite one is the Gamebook Adventures, but more on that in the next post).

Just for the record, there are two kinds of Strategy Games: Real Time Strategy and Turn Based Strategy. I like both of them equally well, because they all teach the player finding, collecting, preserving and well planned investing (using) of resources. There is no linearity in this genre at all as it gives complete freedom of exploring the world through providing unlimited combinations of possible decisions on how to collect and how to use resources, what kind of structures to build, what kind of army to use, when and where to attack the enemy for the most gain. To summarize, this genre teaches the player the same skills as the arcade and role playing games: confidence and taking calculated risks, but it also adds another extremely valuable lesson: management of resources. Just to name a few of my favorite titles here, I have to mention Warlords 2, Warcraft 2 and Heroes of Might and Magic 5. Needless to say, my love to Strategy games and the resource management experience I gained through them, proved very important later on, when I was running a successful business.

Before I finish this post, I feel obligated to mention another genre with a lot of potential that combines everything we discussed above and it adds another layer of real life experience. I am talking about the Computer Simulations. Their potential is great, because these games are supposed to recreate real life situations, but only a very limited number of products in this genre have achieved that to it's fullest extent. My applause here goes to Simon Read and his franchise New Star Soccer. It added a whole new dimension by showing the importance of social relationships with the boss, colleagues, friends, parents, spouse and kids, for achieving success at the ultimate goal: becoming a soccer star.

In conclusion, I would like to say that, by focusing on the visual and hearing satisfaction of the player, game developers have been failing to implement a very important element in their products: critical thinking. As Earl Nightingale pointed out in his recording "The Strangest Secret", when the late Nobel prize-winning Dr. Albert Schweitzer was asked by a reporter, "Doctor, what is wrong with men today?" the answer given was "Men simply don't think". Well, my personal opinion is that humans don't think, just because they are not thought to do so. See, games are failing not at the diversity of narrative (it is quite alright to have a linear story), they are failing at presenting the player with meaningful choices that would eventually affect the outcome of the adventure. This is exactly where Gamebook Adventures have always been strong at and we will discuss that in my next post:
The great potential of Gamebook Adventures and what is wrong with them