I am going to start by giving you one word: Dream!

"What is wrong with people today?" somebody asked the father of motivational recordings Earl Nightingale and he replied "People simply don't think". I would add that "People also don't dream or they just don't pursue their dreams". Those are two of the major problems in modern society. Don't be a "wondering generality" by waiting for things to happen to you! Become a "meaningful specific" by inventing new ways of making things happen!!! ("wondering generality" and "meaningful specific" are quotes of Zig Ziglar).

Second, you have to set the final goal of the adventure, invent the protagonist and decide on the items needed to complete the final task of the game. Our ultimate goal, in the example game we are creating, would be defeating an evil wizard, who is terrorizing the village. Our protagonist is one of the residents of that village. The items needed to win the final battle against the wizard could be be a magic amulet (protects from the wizard's spells) and a magic sword (to be used against the wizard).

Third, you should dream of the natural landmarks in your world and place them on the diagram of the Diverging Diamond. It could be pretty much anything such as forests, swamps, mountains, hills, desserts, sea, ocean, etc. For our example, we are going to split the road into three separate paths and each one of them will be going through a different terrain: forest, mountain and wetlands. One of the items needed to defeat the evil wizard will be hidden in one of those landmarks. 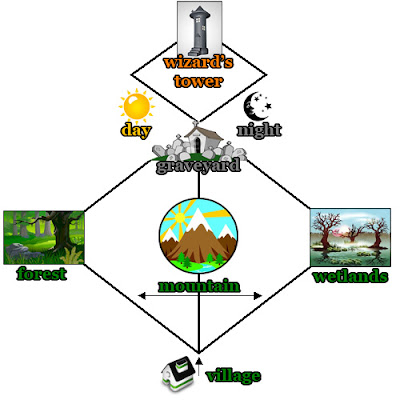 Fourth, place some non-natural landmarks on your map or diagram. Example: we are going to put a graveyard on the way to our final destination, which itself will be another landmark on its own: the wizard's tower.


Fifth, use interesting adjectives for the landmarks to further intrigue the reader by waking up his imagination (this one has its roots in the science of Neuro-Linguistic Programming). Instead of having just a forest, a mountain and wetlands, we would add an adjective to each one of them and call them: the Cursed Forest, the Deadly Mountain and the Forbidden Wetlands. The graveyard is going to become the Wicked Graveyard and so on. This step not only makes everything sound better, it also creates certain images in the head of the reader that can further involve him in the adventure. This is a very powerful step in the process of creating a wonderful world and you should use it as often as possible.

Sixth, since the Diverging Diamond diagram is not just a map, we don't have to limit the encounters there just to physical locations, we can also include events there. For example: in the top Diverging Diamond, instead of having geographical landmarks, we are going to split the path into two separate ways and the reader will have the choice to travel during the daytime or to travel at night.

We have eight locations on the diagram now (not all of them geographical). To keep our first adventure as simple as possible, we are going to write one section for each one of them as follows: 1. Medieval Village; 2. Cursed Forest; 3. Deadly Mountain; 4. Forbidden Wetlands; 5 Wicked Graveyard; 6 Daytime Travel; 7 Nighttime Travel; 8 Wizard's Tower.

Note: Keep in mind that this adventure is based entirely on the Treasure Hunt game mechanic. Also, don't forget that I am keeping the writing as simple as possible (I will do another post on the writing of the story someday in the future)

1. You are a brave young hero. One of the finest in your village. An evil wizard is terrorizing your people. He lives up north, beyond the wicked graveyard that is located north of the Deadly Mountain. You want to end this terror once and for all, so you pack your bag with food and water and leave the village to find and defeat the evil wizard. Read section 2, if you want to go around the mountain through the Cursed Forest. Go to section 3, if you want to hike through the mountain; If you prefer to pass through the Forbidden Wetlands, turn to 4!

2. You are now in the Cursed Forest. It is very dark and scary. You hear all kinds of strange sounds from probably even stranger creatures, but none of them are interested in you. Please proceed to the Wicked Graveyard at section 5!

3. The mountain is really unfriendly. It is not a coincidence that it was named Deadly. Your protagonist starts having doubts about going through here, so roll one die and go to the Cursed Forest if the result is 1-3 or go to the Forbidden Wetlands if the result is 4-6!

4. The wetlands are difficult to cross, after all it is full of swamps. No wonder that they are forbidden. You hardly make it out of the mud a couple of times during your travel. However, passing through, you find a magic sword. Write that down and proceed to section 5 to explore the Wicked Graveyard!

5. The Wicked Graveyard is not welcoming at all. You have to choose now, if you want to cross it in the middle of the day (turn to 6), exposing yourself to the wizard in the tower or do you want to travel under the cover of the night when you have to face whatever undead creatures live here (turn to 7) ?

6. The graveyard is not very dangerous when the sun is out as all skeletons, vampires and zombies sleep through the day. For some reason, the evil wizard doesn't notice you or doesn't care that you are closing in on his place of living. Continue directly to the Wizard's Tower at section 8!

7. No wonder that the graveyard is called wicked. All kinds of evil creatures get up from the graves and walk around at night. You notice something glowing on top of one of the tombstones. It is a magic amulet. Take a note of that in your adventure sheet right now! The zombies, vampires and skeletons are obviously scared of your amulet and don't bother you at all. You get to the Wizard's Tower right before sunrise. Now turn to 8!

8. You get right inside the tower and take the round stairs up to the wizard's quarters. He is furious that a normal human is disturbing his day uninvited. He casts a deadly spell against you. If you have the Magic Amulet, turn to 9. Otherwise, you become the next victim of the Evil Wizard and your adventure ends here.

9. The Evil Wizard is quite surprised that his magic doesn't work on you, so he casts a strength spell on himself and his body changes its shape into a bigger masculine warrior. He grabs his wooden staff and tries to beat you to death with it. If you have a sword in your list of items, turn to 10. Otherwise, you have no way of protecting yourself and your adventure ends here.

10. YOU ARE VICTORIOUS! You defeat the evil wizard and your village is now safe for generations to come. You are well celebrated by your fellow villagers. In a sign of appreciation, they even rename the deadly mountain after you. Congratulations!

Please note that in this extremely short gamebook adventure, I have implemented only random mechanics such as Treasure Hunt (the whole adventure contains two consecutive Diverging Diamonds), a Dice Roll (in the mountain) and two SkillChecks (check for an amulet and for a sword at the Wizard's Tower). Even though, the feel of the game came out not too bad, the outcome depends entirely on your luck, not on your decisions, performance or input.

I also created one difficult choice at the graveyard, confusing the reader with two possible negative outcomes, but neither one of them actually happens. However, it provides the reader an illusion of danger, which creates a lot of tension and is extremely important for the further involvement of the player (creating an emotional rollercoaster in our game)

This short story provides only 25% chance of completing it at the first try (50% chance to find the sword in the first diamond and 50% chance to find the amulet in the second diamond). Considering that, shorter games should be more difficult to provide more playing time through re-runs, 25% is success rate is actually a very acceptable value. When writing longer games, keep in mind that, it could be extremely time consuming for you and very frustrating for the reader, to create a very low success rate, because re-reading a longer adventure multiple times could be horribly boring.

To extend the chance for completing the adventure up to between 30% and 50%, we can create more paths to victory. Example: if in section 3, instead of a dice roll, we tell the reader that he finds an iron spear in one of the caves and then he makes it safely through the mountains, leading him to the graveyard at section 5. At the same time we add an option in section 9 by changing the text to "if you have a sword or a spear in your list of items, turn to 10". Now, the chance to find a needed item in the first diamond increases from 1/2 up to 2/3 (or 66%) and the possible completion of the adventure at the first read just went up from 25% to 33%.

Another good tool we can use to change the odds of success is adding the possibility of winning that is based entirely on luck. We can do that by implementing dice rolls at the end of the adventure. Lets say that section 8 reads "If you have the Magic Amulet, turn to 9. If you don't have the amulet, roll one die and turn to section 9 if the result is 5 or 6. If your result is lower than 5, you become the next victim of the Evil Wizard and your adventure ends here". Remember that dice rolls create "illusion of control", but that is just an illusion, because the reader has absolutely no way of influencing the final outcome at all.

This is all for today, my friends. In the next post, we will work on adding some battles in this adventure to make the game a little bit more time consuming. Then, in the post after that, we will make some improvements by implementing the game-changing mechanic of Logical Conclusion Choices, which allows us to measure the actual performance of the player and therefore, he would have at least a partial control over the outcome for the protagonist.

And don't forget, DREAM YOUR WORLD! Think of a magic world you want to live in and go wild with it. Make it so wonderful, beautiful and appealing that it would be impossible for your readers to put the gamebook away! Suck them into your adventure and have them crave more, once the ultimate goal is achieved and the game is over. Remember the amazing planet in the movie avatar? I've heard that some people have fallen into clinical depression once the movie ended, just because they want to live there, but such place doesn't actually exit.