Definition: a Treasure Hunt Game is any game (computer or otherwise) that allows the player to explore multiple geographic areas, regions or places in the search for treasure (items, information. etc), implementing elements of randomization (finding the treasure is a matter of chance) and surprise (there is little, if any way at all, of telling what kind of treasure the player would find). A perfect example is the board game Enchanted Forest by Ravensburger.

Note that every Treasure Item or Information found during a Treasure Hunt Game is ultimately a key which is needed to open a corresponding door later in the adventure. The mechanic of "if you have [this key] item, go to [that door] section or page" is inevitable in a Gamebook Adventure.

It is a fact that all gamebooks implement a Treasure Hunt algorithm. They have come a long way since the first Fighting Fantasy book was published back in the early 1980s, but I recently realized that many of them still have similar approach and game mechanics. The old "which door choice" of "do you want to go left or right?" is now replaced by the "shell choice" question of "which area would you like to explore?", but either way, that is a Treasure Hunt algorithm.

Even though, they seem completely different on the surface, "which door" and "shell game" choices represent a very similar gamebook mechanic deep inside: the outcome is a matter of luck rather than good performance of the player. Here are the examples: "do you want to go left or right?" against "do you want to cross through the forest or do you want to explore the caves in the mountain?". In both cases you have absolutely no idea what is going to follow nor you have any valuable information to help you make the choice which will lead you to the better outcome for your protagonist. You might as well throw the dice to find out what is going to happen. However, the "shell game" choice is preferable due to its storyline value and the fact that it creates an illusion of control. Besides, we all love learning new things, exploring new areas and being unexpectedly surprised. What I am trying to say is that the "Treasure Hunt" has its place in the gamebook adventure genre, but way too many books rely entirely on this mechanic alone, forcing the player to read the book a few times in a search for the correct path to victory. I have to admit that having more than one way to reach the final goal of an adventure is an excellent improvement as a result of the gamebook evolution throughout the years, but the author should seek the right balance between Treasure Hunt Mechanics and Logical Conclusion Choices in every adventure, so there is enough room for meaningful input by the reader (he gets rewarded for good performance) as well as just enough randomization of the adventure (the outcome is not always predictable, providing enough excitement and surprises to the reader).

I already did a post on Logical Conclusion Choices and I will soon write a post on Logic Puzzles (another mechanic that gives the player real control over the outcome). Today I will focus on how to actually build a good Treasure Hunt for our gamebook adventure? The answer is: Diverging Diamond. Why not write "branching paths" or create a "straightforward story line"? Well, because creating too many branches is a waste of time for you, as an author, and also a waste of space in the book and therefore a waste of money if it ever gets published. Imagine writing 100 sections and the reader only goes through 20 of them to finish the adventure! You wrote 80 more that never got to be read and your game left the player with a feeling that it was too short, regardless of the fact that it had 100 sections. God forbid, you tried to sell it too! Can you imagine the reviews: "I paid too much money for such little satisfaction as I finished the adventure in 15 minutes. Beware, the large number of sections is just a marketing tool as this gamebook was made to look bigger than it actually is". Not so good, is it now? The other extreme, "straightforward story line", could be just as disappointing. It will be a chain of Logical Conclusion Choices without any Treasure Hunt and therefore absolutely no surprises, but you will still have to write bunch of bad outcome or instant death sections. Again, waste of time for you and very boring and upsetting for the reader. I've made that mistake a few times on my first couple attempts at writing a gamebook adventure.

The Diverging Diamond approach creates the perfect balance between the "branching paths" and the "straight forward story line" styles of writing, because it puts the control of the game in the hands of the player, but at the same time it keeps the element of surprise in the adventure. 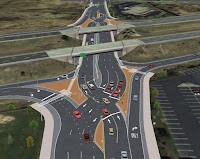 I borrowed the name "Diverging Diamond" from the Science of Highway Engineering. However, to adapt the meaning to the terminology of games, I have to explain that a "Diverging Diamond" in Gamebook Theory would be an intersection of branching paths (each one of those paths is completely independent with its own quest or adventure) ultimately merging again to form the beginning of another diverging diamond or to lead the player to the final skillcheck of the adventure. 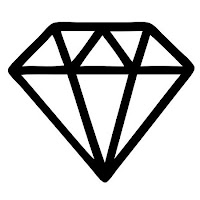 For an example: if we had to write a short gamebook story, where a medieval hero has to defeat an evil wizard, who is terrorizing the village, the adventure starting location would be the village (point A - top of the diamond) and the hero's final destination would be the wizard's tower (point B - bottom of the diamond). We would branch the path at point A (the village), creating a fork of different paths, but note that they all lead to the final point B (the wizard's tower). If the author decides, he can intersect those paths somewhere in the middle of the adventure and give an option to the reader to switch from one path to another. That creates a diagram that looks like a diamond. It is also possible and game designers should feel encouraged to create smaller diamonds inside the main game diamond.

To create a simple to understand example, we should take just the outline of the diamond diagram. That would give us two paths at the intersection right outside the village - left and right. Remember, that was the archaic approach of the gamebook writers back in the 1980s. As we discussed earlier, we would replace "left" with "forest" and "right" with "wetlands". Neither one of the paths leads to an instant death and both of them merge at the end of the diagram at the wizard's tower, but each one of the paths includes a different battle encounter and only one of them contains the item necessary (lets just say that it is a magical amulet protecting the protagonist from the wizard's magic) to complete the final skillcheck at the end of the adventure. If you create a very diverse path structure, it would be a good idea to have more than one way to finish the adventure, so it is not too difficult. I think the magic number here is 'three': an average gamer should be able to successfully finish the gamebook in three attempts at the most (33% chance of success at each try).

No, I am not saying that this is the way to write a gamebook! I am just giving an example of what a "Diverging Diamond" looks like and I am explaining the basic principles of the "Treasure Hunt" approach. Later on, we will talk about how to mix this technique with the Logical Conclusion Choices in order to create a compelling gamebook adventure for our readers.

Some of you may ask "Why not call the diagram a simple grid, just like it is in most games?" and they could show me the map of "The Forest of Doom". I must point out that they are correct and the map of the game looks just like a grid, but the truth is that movement in the gamebooks is rarely horizontal. Most of the time, even if you simply choose between "left or right (east or west)", once you make a decision, you move one step closer to the end of the book and it is (almost always) impossible to go back and explore the other direction and therefore the move on the map could have been horizontal, in the sections diagram of the adventure the move is also vertical. When you combine horizontal and vertical movement, the result is actually a diagonal move, just like it is in the "Diverging Diamond" diagram. The conclusion is that the map looks like a simple grid, but the actual diagram of the adventure is still in the form of diamond with a lot of diagonal movement.